This week, on February 7, 2018, I celebrated four years of continuous sobriety and I can’t express in these words how blessed I feel for this gift that I’ve been given. I have never felt more healthy and secure in my own skin as I do today. I love being a father to my two boys and the small circle of people on my life. So as I sit drinking coffee reflecting on my life today I adjust my tilted halo and smile.

Four years ago on February 7, 2014 is the morning I woke up in a Charleston emergency room with stitches above my right eye, two new colleagues in the hospital waiting room, a pounding headache and no recollection as to why. Having fallen off the wagon again for the umpteenth time in the past eighteen months of attempted sobriety I kept hearing the same familiar phrase which had become a mantra of mine; “this isn’t going to end well.” I didn’t realize at the time that this was one of the most important days of my life as it led to a change in me that the AA Big Book best describes as “the desperation of drowning men. What seemed at first a flimsy reed, has proved to be the loving and powerful hand of God. A new life has been given us or, if you prefer, “a design for living” that really works.”

I named my blog after hearing the term Ragamuffin used by Brennan Manning to describe we recovering alcoholics and addicts, including himself, as Ragamuffins; saved sinners who receive God’s mercy and grace. As I write about in most of my earlier blogs I credit a clip of Brennan from the movie Ragamuffin with changing my relationship with God and the realization that God had removed my mental obsession to drink. Manning spent his last 41 years before his 2013 death helping “sinners journey from self-hatred to self-acceptance.” He’s able to do this because he’s one of us. He writes about how we all have an ‘Imposter’ within us, “the slick, sick, and subtle impersonator of my true self.” Recovery has allowed me to take off my mask for good.

Here’s the clip that changed my life:

We often hear that someone has to hit rock-bottom before they will make the decision to get clean or sober. My understanding is that rock bottom is not jail, divorce or public humiliation but a place where you are so alone and broken, so poor in spirit, that you have no where or no one to turn to but a higher power. Manning writes, “But when we accept ownership of our powerlessness and helplessness, when we acknowledge that we are paupers at the door of God’s mercy, then God can make something beautiful out of us.” This is were I finally was four years ago after unsuccessful trying to get sober through willpower and ultimatums. Having already been divorced with an older son, Aidan, I carried guilt around like a 200 pound bag and now I was close to having my younger boy, Brody, in the same broken situation. I truly was finally poor in spirit with no one to turn to but God.

The three books that saved my life are The Holy Bible, the Alcoholic Anonymous Big Book and Manning’s Ragamuffin Gospel. Manning has a chapter in the Ragamuffin Gospel called Tilted Halo which opens with a joke about a man who’s complaining about headaches and after telling the doctor about his perfect alcohol-free, tobacco-free, and perusing-free life the doctor replies, “Your trouble is you have your halo on too tight.” For Ragamuffins he describes, “the saved sinner with the tilted halo has been converted from mistrust to trust, has arrived at an inner poverty of spirit, and lives as best he or she can in rigorous honesty with self, others, and God.” What does this even mean? Well I personally had no idea that through recovering from alcoholism I’d find out how to live with easy grace. I just came to AA to stop drinking yet I received a whole new life.

Once I saw that God was working in my life and that He had removed an obsession to drink after my willpower failed so many times my faith started to grow and I started a quest to change the way I lived beyond not drinking. I committed to rigorous honesty, kindness and service to others. I highlighted, re-read and dissected so many times this paragraph from Tilted Halos, “He knows repentance is not we do in order to earn forgiveness; it is what we do because we have been forgiven. It serves as an expression of gratitude rather than an effort to earn forgiveness. Thus the sequence of forgiveness and then repentance, rather than repentance and then forgiveness, is crucial for understanding the gospel of grace.” The God Manning described didn’t involve having to earn God’s love by living a certain way with my halo too tight but instead to trust that God loves me as I am and accepting my own brokenness and wanting try my best each day to live the way He wants me too. That’s how I understand God’s grace.

I should have added a disclaimer at the beginning of this blog warning you that I will be talking about God as I realize it makes a lot of folks uncomfortable. I read an article on Facebook this week praising “evidence-based” recovery programs through disparaged Alcoholics Anonymous and faith-based recovery which they claimed had a 5% success rate. There are a lot of people who come to AA as I did for a year and half and don’t do the work as it’s laid out in the AA Big Book and they can’t remain sober or clean. I am not going to put down any other recovery programs as there may be multiple paths. However, I don’t know anyone who has rigorously followed the 12 step program as it’s been laid out for us who isn’t sober or clean. So I’d estimate the program at a 100% success rate.

Just before a Christmas it felt as if the perfect storm of life events hit me at once and it pushed me to the edge where I felt like Job from the Bible yelling at God asking, “besides my sobriety what have you done for me?” My oldest son was struggling and my younger son was scared as a result, and my employer of 21 years had informed me that it was time to be looking for a job outside of the company. I had spent the night in a NH hospital with my teen and was rushing to pick up my younger son for church when I just felt like my world was falling apart for the first time since four years earlier and still being single I didn’t know if I could manage it all alone anymore. Within the hour I was watching my son play The Innkeeper in our church’s Christmas pageant and I couldn’t help but feel joy again. Later in the service I had tears rolling down my cheeks as my friend and Hope Church Family Pastor, Andy Bauer, preached with passion and faith about his six year old daughter Ellie who is fighting stomach cancer as he spoke of God’s promises. It was exactly what I needed to hear and reminded me of all that I’ve been blessed with.

Life happens and no one ever said you wouldn’t face challenges just because you’re sober. I am a naturally positive person and rarely have I felt overwhelmed and alone in four years as I did that day in December. However since that day I’ve realized how blessed I am. I feel like I’m in the eye of a storm and am calmly comfortable here. It’s been that way for much of my past four years. The solitude of recovery plays an important as it allows us to grow our faith. I’m trusting that God has a plan for me and my role in His plan is to continue to do the work he calls me to do each day. Two weeks ago I was driving around New England looking at potential new high schools with Aidan and I remarked how this was divine intervention allowing us to spend this time together since I was between jobs.

The past year has been full of incredible experiences as I took my boys to the Florida Keys, skied down the summit of Big Sky Montana, saddled up on my new Harley with my friend & mentor Dr Tom, was asked by my church to help lead the Teen Youth Group Summer Camping Trip and our mission trips to the Bowery homeless shelter in NYC. I also have had some special people come into my life and have been given so many opportunities to serve others that Brody once complained from the couch as I informed him that we had to get out the door to help someone, “daddy, we help too many people!” What a wonderful affirmation from my son! 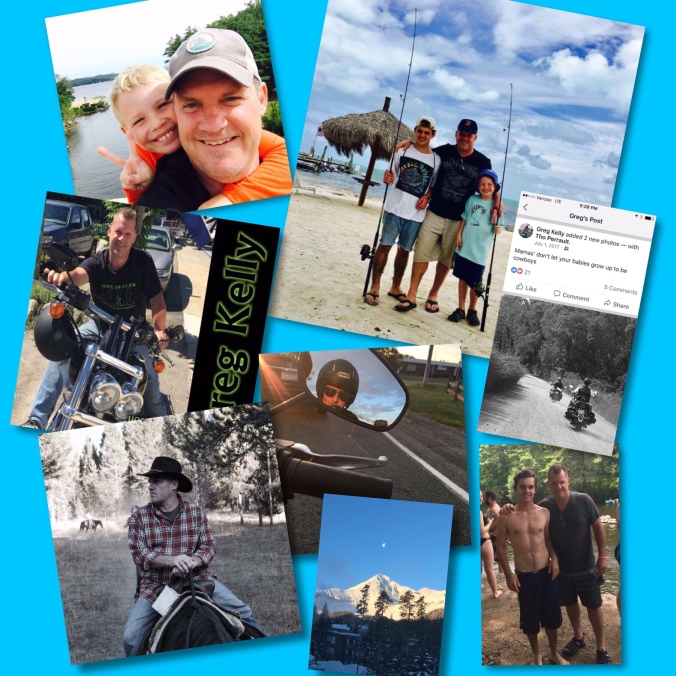 Reading Ragamuffin Gospel again was a reminder of the faith allowing me to live One Day At a Time; no longer carrying guilt and resentments from yesterday and leaving tomorrow to God. Everyday I wake, as a grateful Ragamuffin, and live the way Jesus would want me to. Ragamuffins have “made peace with their flawed existence. They are aware of “their lack of wholeness, their brokenness, the simple fact that they don’t have it all together. While they do not excuse their sin, they are humbly aware that sin is precisely what has caused them to throw themselves at the mercy of the Father. They do not pretend to be anything but what they are: sinners saved by grace.”

So as I enter my fifth year of recovery; unemployed and dealing with life on life’s terms I admire my Tilted Halo in the mirror and thank God for the gift of being a Ragamuffin.

Thank you for reading. 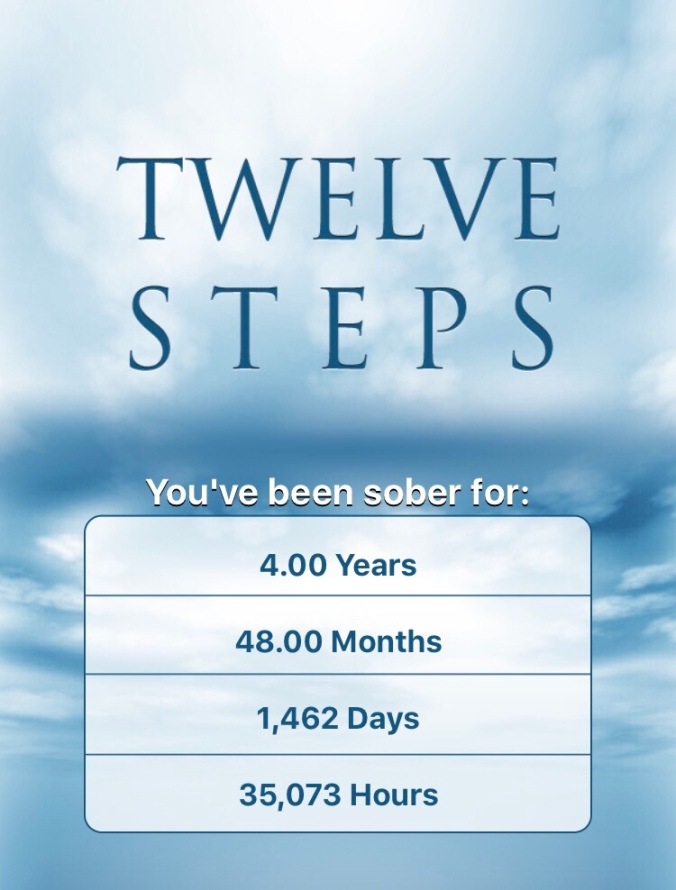